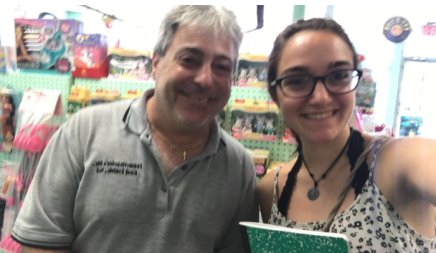 It is hard to miss 62 White Street in Red Bank, New Jersey. Hobby Masters is a childhood dream, a fortress, enticing from the outside with a magnificent painted mural and larger-than-life nutcrackers welcoming customers at the doorways. With each swing of the door, soft bells ring as a message that a customer has entered. A world of magic, with toys from dolls to trains to board games, filling both stories of Hobby Masters. I recall my dad holding my hand bringing me into the store as I was growing up, but this time, it was by myself that I walked in, this time for a new purpose: I was determined to interview someone as spectacular as the feeling a child gets when told to pick any toy in the store. This is where I met Lou.

Lou Troisi is the general manager at Hobby Masters, and it became clear to me within seconds of entering the store that not only does he know his hobbies, but he genuinely cares about what he puts into his job. From hearing him speak of building a custom wooden dollhouse to seeing him gladly help a customer understand the hobby car he had purchased, Lou welcomes each question and challenge. In fact, he makes his job seem so fluid and fun, for a minute, I forgot that he was working. When he was distracted by a customer, he returned with apologies and a promptness to answer my questions. It was incredible to me that he decided to take the time to talk to me. It was in seeing the way he handles customers that I felt like I was watching a movie, flashing back to a small town from older times, observing an expert who truly wants to help people of the community with their interests, including mine.

Lou began working at Hobby Masters in 1983 when his parents caught a glimpse of a “Now Hiring” sign when buying the game Trivial Pursuit. After a suggestion from his parents, he went in to inquire, and because of Trivial Pursuit, he has been helping to make hobby dreams come true now for a fascinating 36 years. He has developed close relationships with the people of the community and it surely shows⁠—I watched a woman walk into the store, and when asked if she needed help finding anything, her response was, “Oh, I just want to say hello to Lou.”

And just when I believed that I knew the peak of Lou’s friendliness, I asked him what was his biggest passion. I could see the question churning the greatest answer: “The thrill.” Of course, not quite understanding what thrill he was referring to, I asked more. Lou revealed that he doubles as a volunteer first-responder and firefighter. His small-town Vermont college introduced him to a community in need, and since 1978, he has been compelled to voluntarily help the communities he calls home. He is on the clock 24/7 and can recall times that he kicked off his shoes around 11 p.m., returning home from Hobby Masters, just to switch them out for fire boots. He speaks fondly of his volunteer service: “I enjoy being able to accomplish something no one else will.”

For Lou, it is never about fame or acknowledgement. He has such an evident and genuine honor with his everyday sacrifices. He explains that he saved a life during Hurricane Sandy, and when the community wanted to grant him a medal, he was reluctant. He believes that he does not deserve recognition for what he does as he sees his actions as his honorable duty. He does not want the world to know about him or what he has achieved as he takes his good deeds to his own heart, knowing he does what he can to help the people surrounding him.

Whether he is helping people develop and grow their hobbies or responding to a call that could save lives, Lou is one of the most humble and honest people I have ever met. His favorite quote is: “Don’t be a part of the problem, be a part of the solution.” He has certainly proven to follow this mentality and philosophy through his everyday life and philanthropy, and though he sees no reason to be recognized, it is because of people like him that our days are bright and lives are changed for the better. If you ever find yourself in Hobby Masters, make sure to send a smile Lou’s way. I can guarantee he will send one right back!